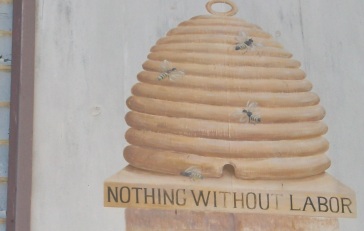 Today, Nathanael learned about Dorcas, or Tabitha, from Acts 9, in his Sunday School class. He told me her story. “She made coats.” “She died.” “People prayed.” “She was alive.” I was so intrigued, I had to read more.

and gave them all away.

And sewed together broken lives with her giving.

And sewed together weeping hearts with her love.

And sewed His lovingkindness into each stitch.

She gave the coats away.

for the least of these.

She labored for Him.

Because He is all she saw

in her weaving of this life

in her tailoring of good works

She knew that showing His grace to the least

meant sharing her most

the seaming and knitting of a tattered humanity

These things of His that she gave away…

is what made her live.

She was full of good works and acts of charity. 37 In those days she became ill and died, and when they had washed her, they laid her in an upper room. 38 Since Lydda was near Joppa, the disciples, hearing that Peter was there, sent two men to him, urging him, “Please come to us without delay.” 39 So Peter rose and went with them. And when he arrived, they took him to the upper room. All the widows stood beside him weeping and showing tunics and other garments that Dorcas made while she was with them. 40 But Peter put them all outside, and knelt down and prayed; and turning to the body he said, “Tabitha, arise.” And she opened her eyes, and when she saw Peter she sat up. 41 And he gave her his hand and raised her up. Then calling the saints and widows, he presented her alive. 42 And it became known throughout all Joppa, and many believed in the Lord.

FEEL FREE TO FORWARD or SHARE THIS BLOG OR THE POSTS IF YOU THINK SOMEONE MAY BE ENCOURAGED! Thanks for sharing in this with me. However, for use of content WITHOUT linking to this blog: A. Brooke Mercier and smellingthefeathers 2015. Please ask permission before using any photos or written content. Thank you!
%d bloggers like this: